According to the U.S. Department of Health and Human Services 1 in 4  U.S. students say they have been bullied and 70.6% of young people say they have been “bystanders” (witnessed bullying).  As adults we may find ourselves at a loss for what to say or do, so how do we stop this epidemic? Empowerment is key. When we define bullying and its many forms we can employ strategies and tactics that turn our youth from bystanders into upstanders. MicheLee Puppets uses puppetry as a disarming and relate-able way to convey these messages to students in A Good Day for Pancake (K-2nd grade) and The Upstander League (3-5th grade).

Start the bully prevention conversation with your youth by using DRT– Definition, Roles and Tactics. Make it a game! Role play the different types of bullying to allow your child to practice being an Upstander. Remember, these tactics aren’t just for kids, adults can use them too.

Bullying is intentional behavior that is repeated or has the potential to be repeated. It creates a real or perceived imbalance of power and is used to harm someone and their reputation. Some examples are: 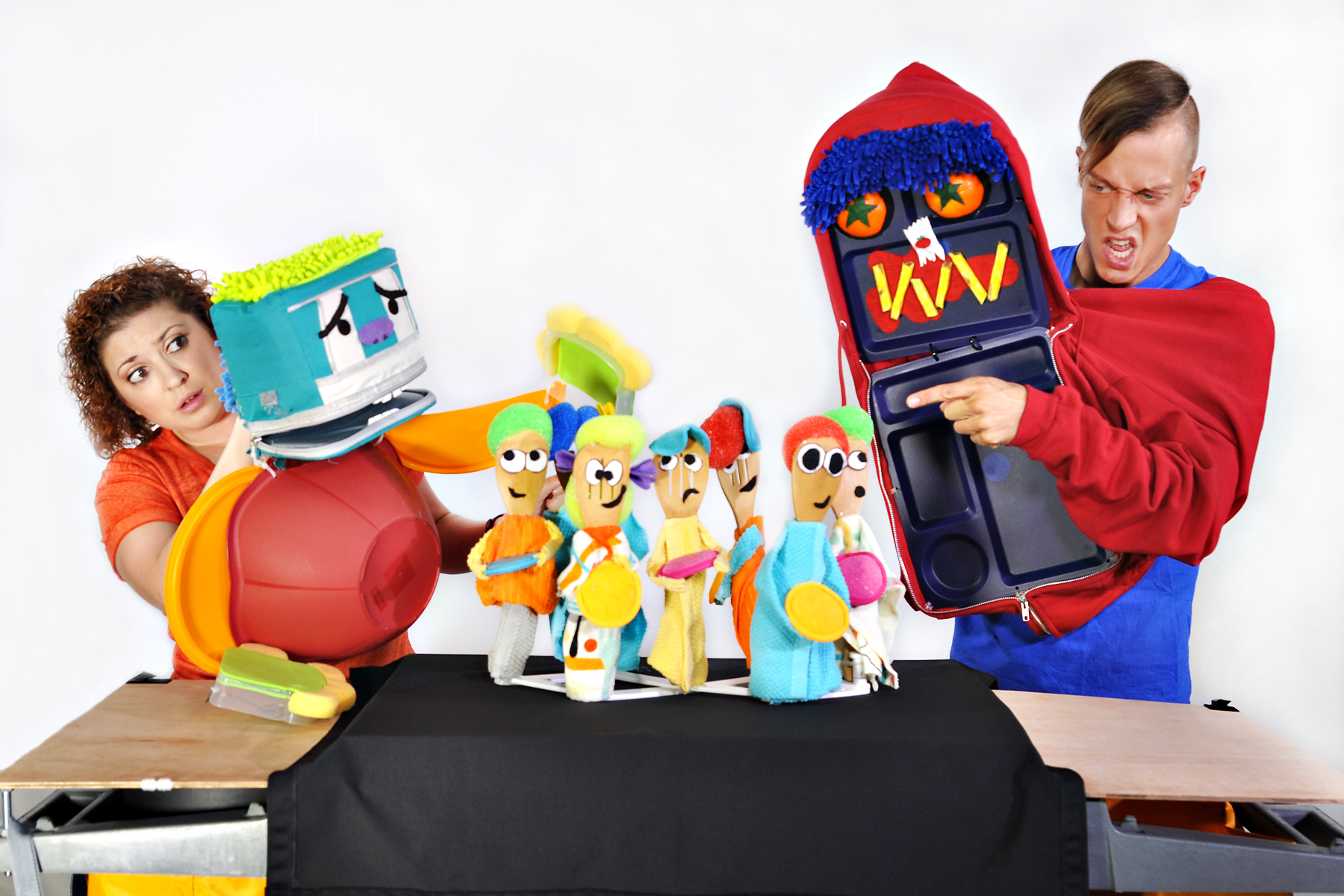 Person being Targeted by the bullying behavior

Bystander- someone who witnesses bullying

Upstander- someone who witnesses bullying and does something to stop it 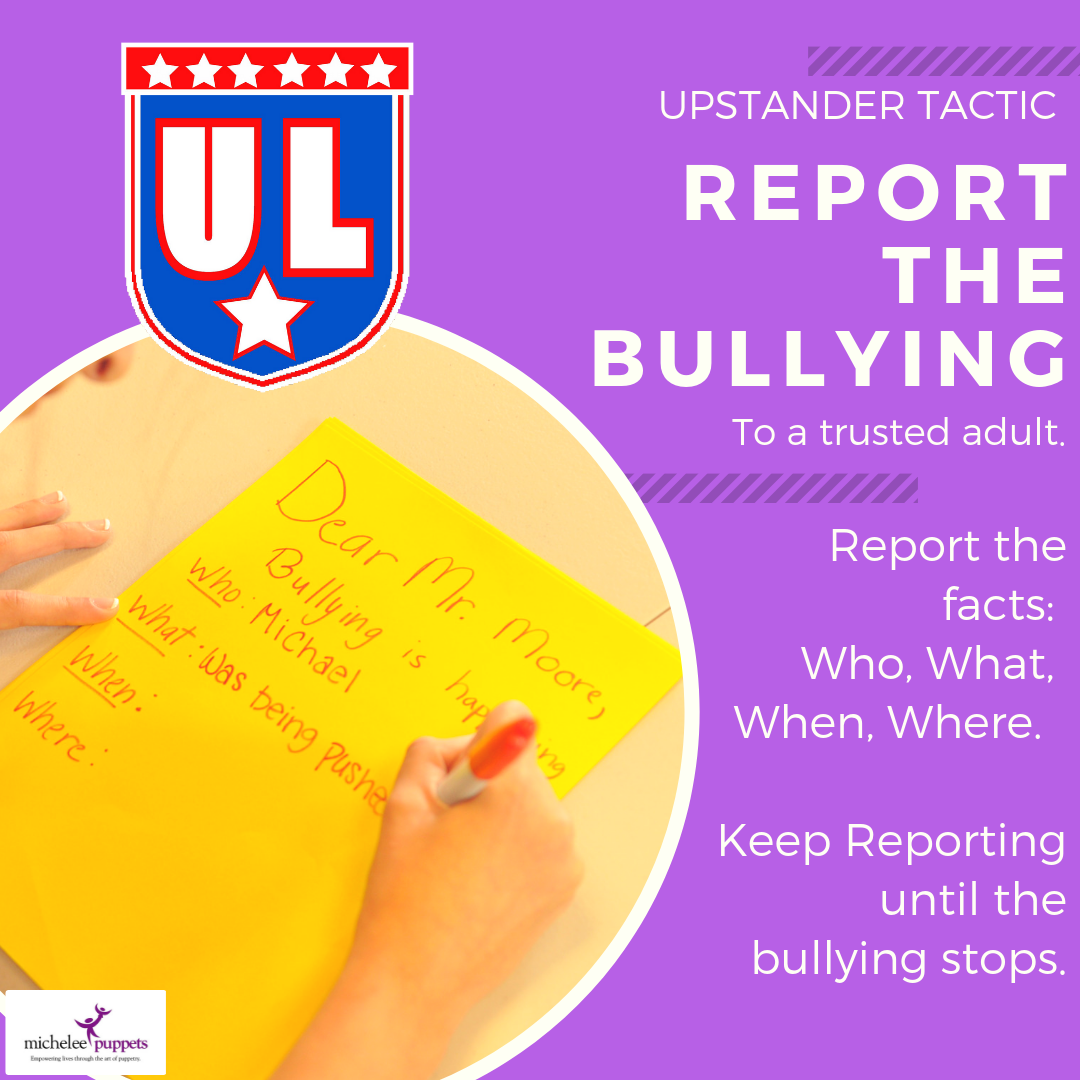 Encourage your child to report in person, so that they can clarify the facts. If they are nervous, reporting can be done in a note, even written anonymously if they fear retaliation.

Why is REPORTING important?
In order to have the proper resources to combat bullying, reporting is essential. Many states report bullying through school INCIDENT RECORDS rather than through student surveys. States then report only a 1% bullying rate. 2 out of 3 schools report 0 cases, and yet according to the The National Center for Education Statistics 21 of every 100 kids ages 12 – 18 are bullied at school. 1 in 10 students cite repeated bullying as the reason they drop out. 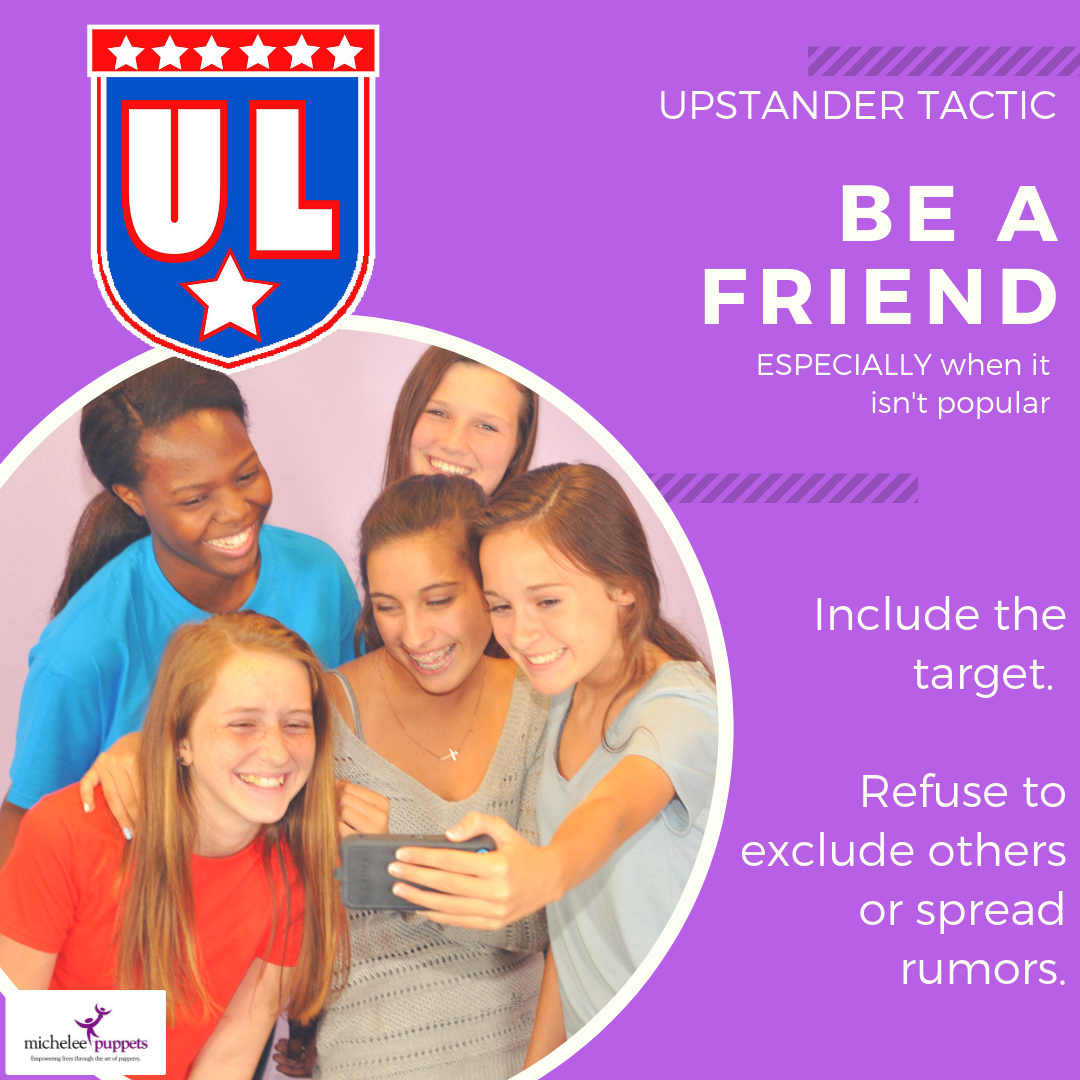 “Be a Friend” is a crucial, especially with social/emotional bullying. This tactic can be one of the most difficult to use because it can mean standing up to friends, however, the more people who use this tactic, the more effective it becomes.

We often hear of “frenemies”, individuals who suddenly exclude or spread rumors about a friend. It is up to bystanders to become upstanders and  combat this behavior with friendship.

Whether or not you and the TARGET are friends, you can still “be a friend” by speaking up for the TARGET, including them in groups, and refusing to spread rumors. And, of course, report any bullying behavior to an adult that you trust. 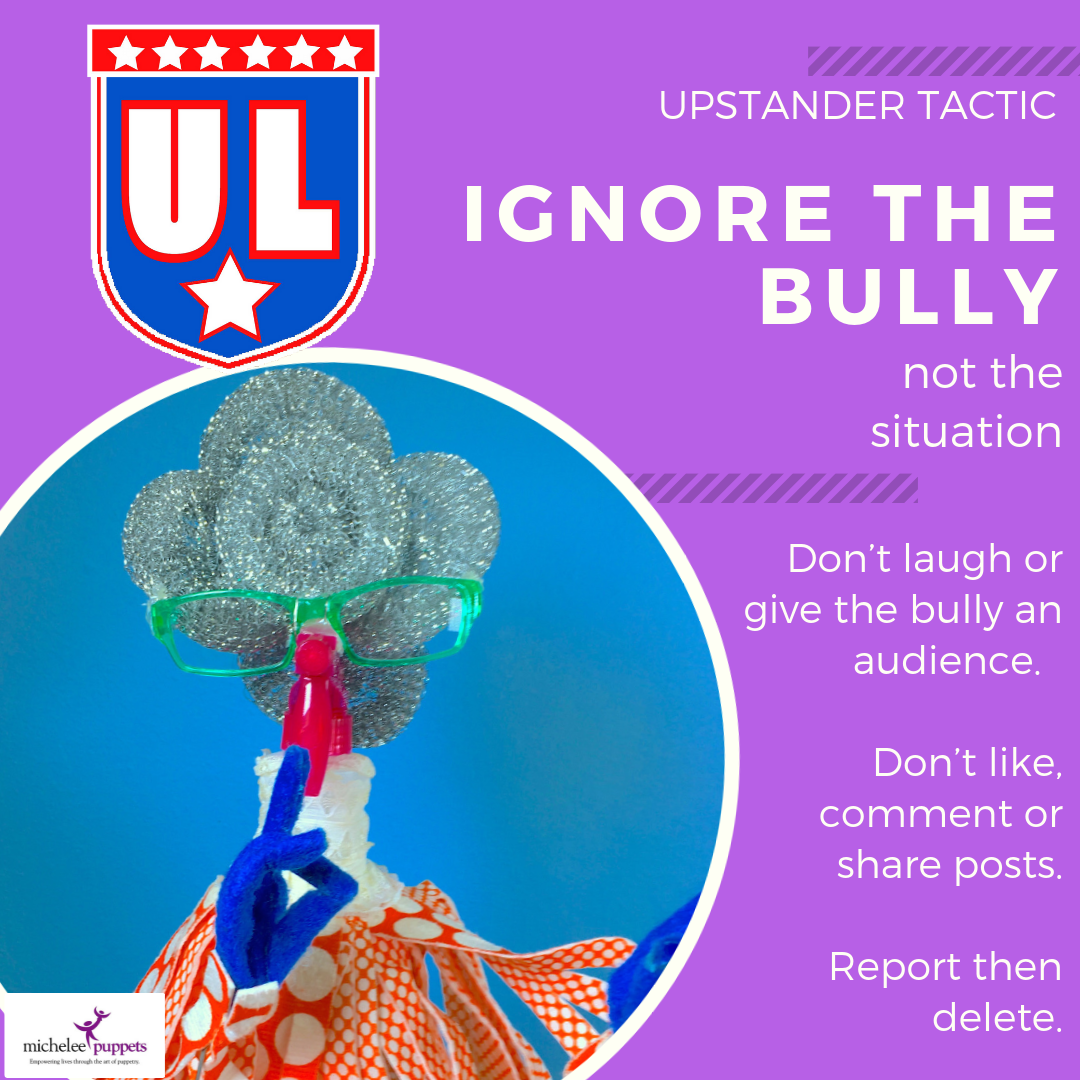 “Ignore the bully” works especially when groups of people participate. To ignore the bully is not to ignore the situation. Reporting is an essential component.  Many people bully because they want to get attention. Simply refusing to be an audience can stop bullying in its tracks.

This tactic is crucial for cyberbullying. Don’t respond online, even if it is to stand up for the TARGET of the bullying. Report the bullying to a trusted adult, then delete. 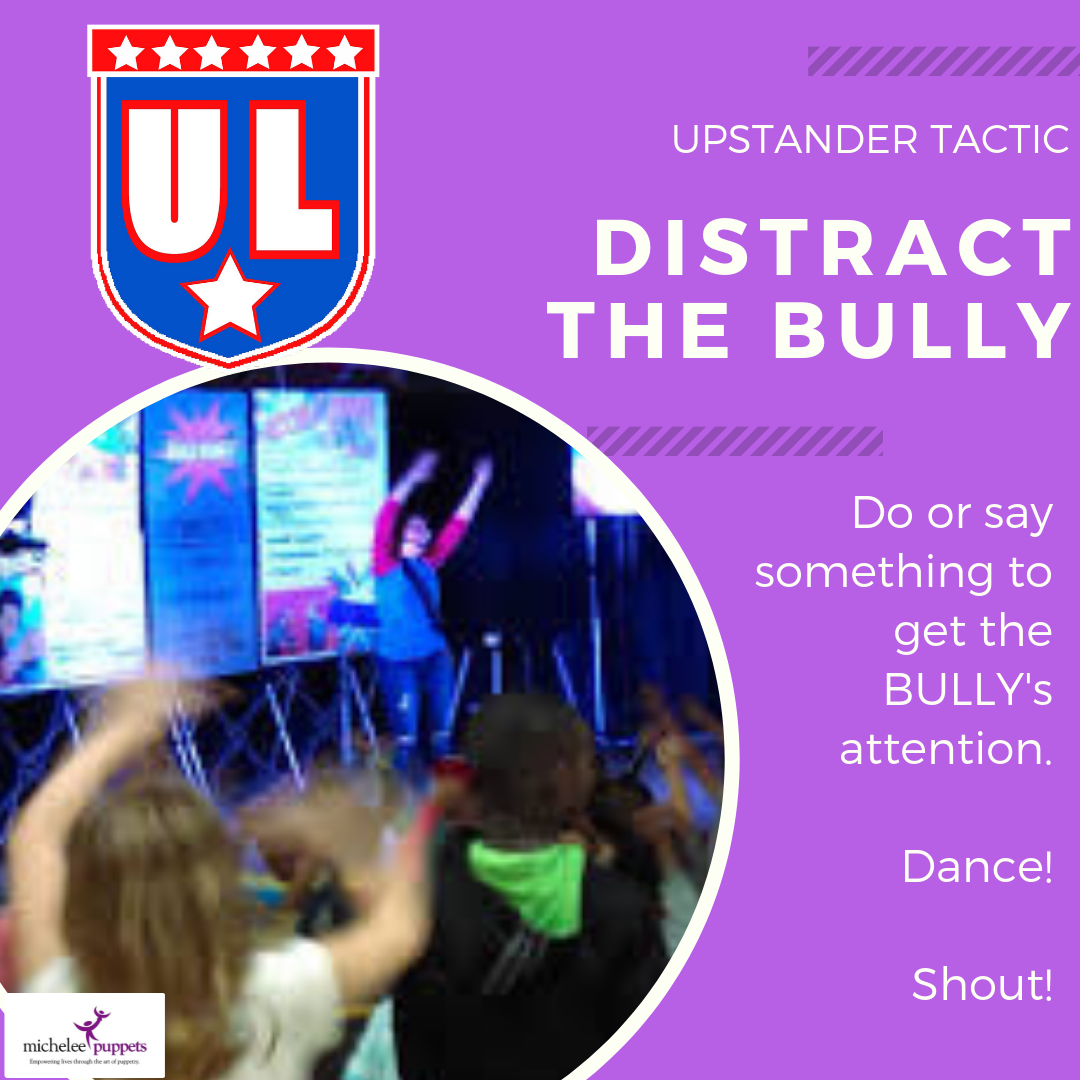 Distracting a BULLY can help a TARGET escape a dangerous situation. Talk directly to the bully, even use their name and do something to get their attention.

Upstanders can shout something like “Hey (insert bully’s name) the cafeteria’s giving out free ice cream right now!” or “The Principal is coming.” Upstanders can even find funny videos on their device to show the bully or dance around wildly to get their attention. What other distractions can you and your child create? 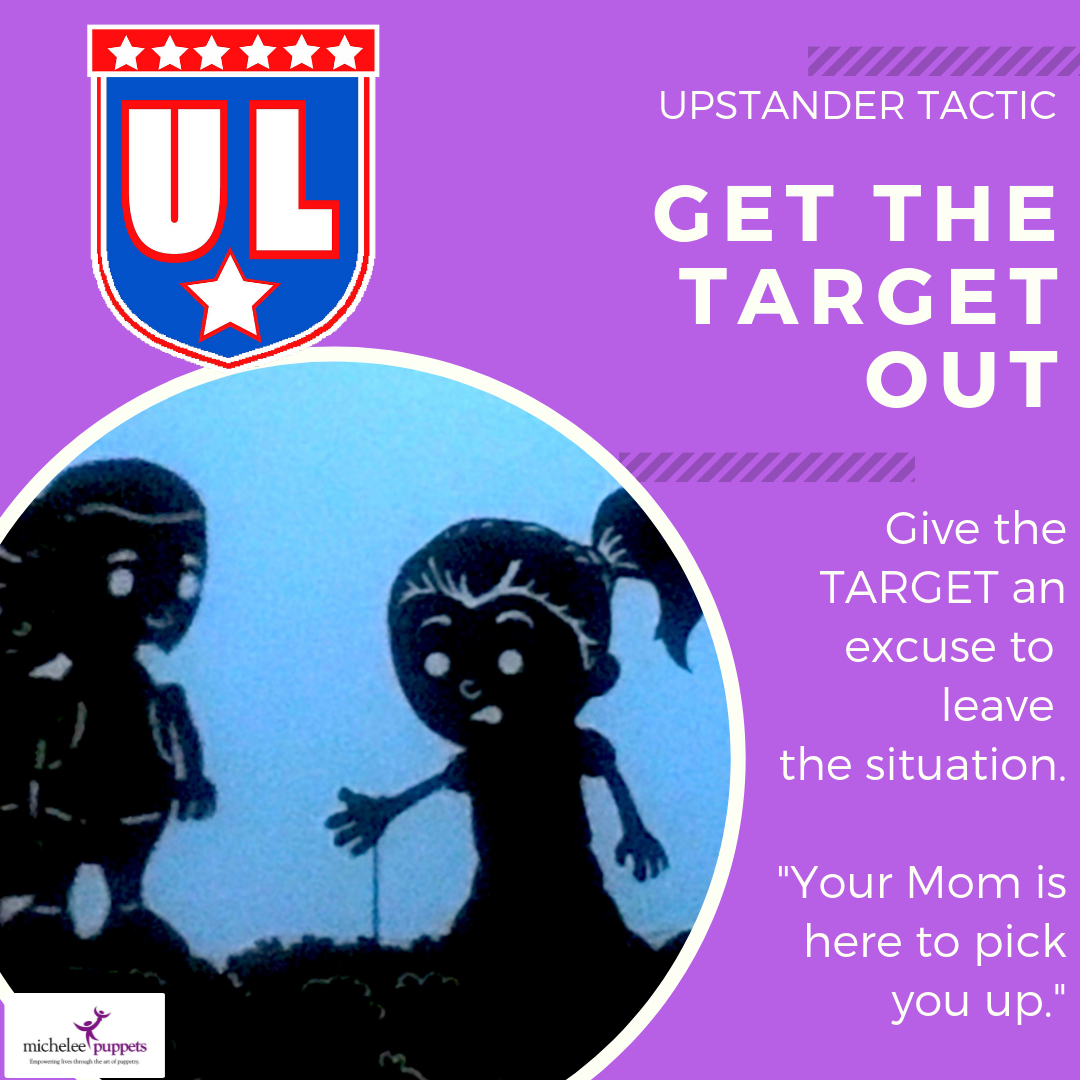 Creating an excuse such as “Your Mom is here to pick you up” can help remove a TARGET from a dangerous situation. This technique is especially important to combat physical bullying.

Be prepared! Practice excuses that can remove a Target from a bullying situation. Think of public locations such as a playground, library, party, etc. and come up with excuses that could apply in each location. Determine which excuses will work in a school setting.

Your child may have questions about lying related to giving excuses. Remind your child that these excuses are for emergency situations (similar to stranger danger) to keep someone from getting hurt. 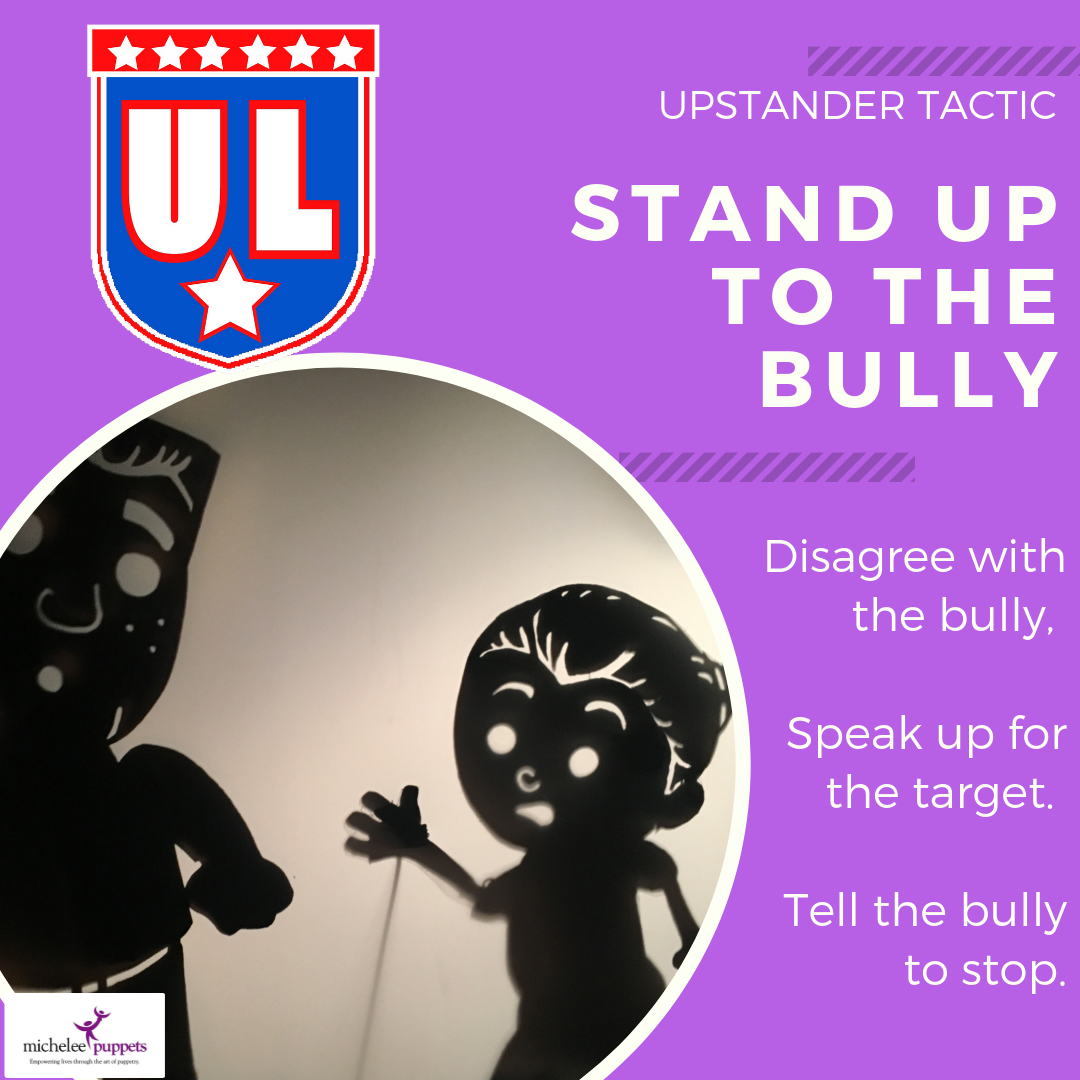 Standing up can take many forms, but at its essence, it means to tell the bully to stop. People may think of physical violence, such as in “A Christmas Story” when Ralphie, a TARGET of bullying, fights back bloodying the bully’s nose.  This is not what we mean. By adding to violence, it puts more people in danger. Words Have Power.

Tell the bully to stop. Get others to do the same. Groups are powerful against bullying. If someone is spreading rumors, verbally bullying someone, or physically bullying them, tell them to stop. Speak with confidence. Then report the bullying to a trusted adult.

Click here to book “A Good Day for Pancake” (K-2nd grade) or “The Upstander League” (3-5th grade at your school or venue.


The Upstander League -A Bully Story from MicheLee Puppets on Vimeo. On his first day at a new school, Steven becomes the target of bullying. Instead of helping, his peers join in, leaving Steven feeling powerless. Learn how upstanders can make a difference in a bullying situation by using tactics such as “Be a Friend” and “Stand Up to the Bully.” MicheLee Puppets makes learning fun with shadow puppetry in The Upstander League “A Bully Story.” 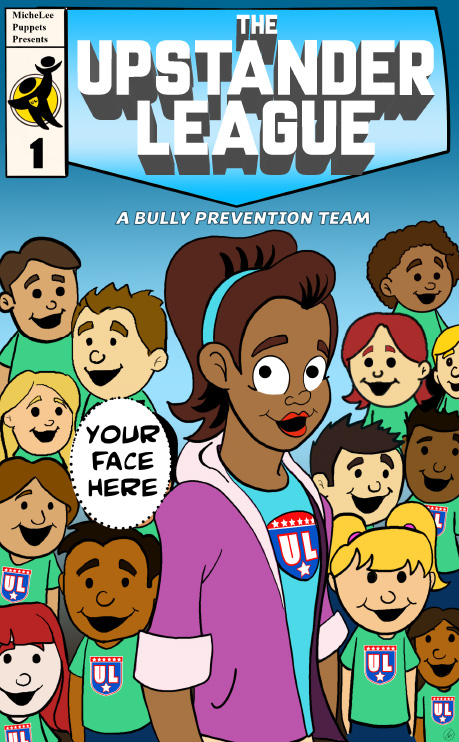 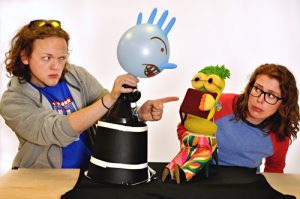 Be informed. Use these resources for more information on bully prevention: